In remote areas with little infrastructure there is a lack of in situ soil moisture data and these areas are often most affected by seasonal rains and droughts. This research project proposes to create an in situ sensor system consisting of two units capable of recording soil moisture, soil temperature, air temperature, humidity, and precipitation amounts. These units will be completely self-contained and self-reliant. A full solar power system will be built with solar panels, battery, and charging controller allowing for over a year of sustained in situ data collection. Collected data will be transmitted to servers using the Iridium satellite communications network with daily-collated data transmissions. This data will be stored in a database on local servers and available on the Internet for analysis. The aim of these sensor units is to prototype the hardware, develop the software, and define the protocols needed to create an in-situ collected soil moisture database. Once these two systems are complete and have undergone stateside field-testing, additional funding will be sought to create additional units to enable deployment of a wide area network of sensors across various environments in Ethiopia, where there is a lack of such monitoring data. The soil moisture data collected by this sensor network will have many environmental science applications including drought analysis, subsistence farming sustainability efforts, remote sensing calibration, baseline climate data for pedogenic carbonate formation for paleo-environment reconstruction (Breecker et al., 2009, Bedaso et al., 2011), and further understand the significance of soil carbonate formation and its uses in atmospheric carbon sequestration efforts (Washbourne et al., 2012).

Environmental sensor networks have the potential to become a standard research tool and revolutionize the earth system and environmental sciences (Hart & Martinez, 2006). This research project will construct prototype units for a Large Scale Single Function Network (Hart & Martinez, 2006) and will consist of three phases. Phase One will be the construction of the sensor systems and will consist of hardware acquisition, integration, and construction. Two different sensor units will be constructed. Both units will be able to measure soil moisture, soil temperature, and air temperature, while one unit will also measure humidity and precipitation amounts. Software developments and enhancements will occur in this phase for both sensor integration and communications. Phase Two will entail deploying the sensors locally here on campus or at a UDRI facility and collecting data for approximately one month. This initial data collection period will allow for any communications or hardware issues to be easily diagnosed and solved. Phase Three would involve placing the sensors for a longer term test, approximately two months, in a similar environmental setting to Ethiopia in the US Southwest near El Paso, Texas. Data collected from all field tests will be statistically analyzed, cross checking readings with each unit and local weather stations for accuracy. 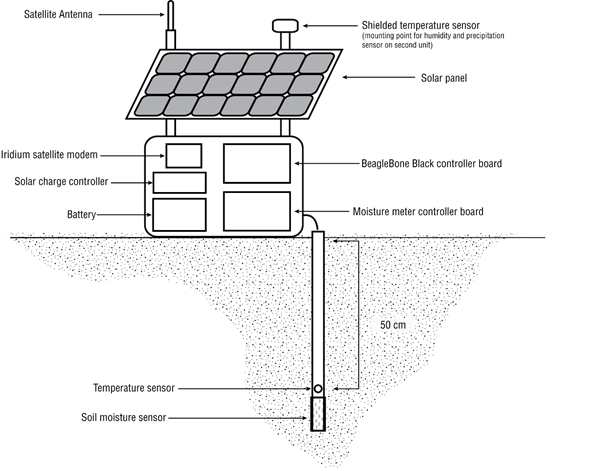